‘Anywhere Anytime’ is filled with horrifying paintings of war, executions and refugees. An indictment of violence and oppression around the world. With a poem by Antoine de Kom.

Every day we see disturbing images, news of disasters, terrorist attacks, tsunamis and wars – in the Middle East, Africa or wherever. We are almost getting used to it.

Injustice and oppression have always existed around Masha Trebukova. The Soviet Union, where she spent the first half of her life, was a totalitarian country.

Until recently, Trebukova did not tend to paint about injustice and oppression. She believed that art and politics should preferably stay separated. But after the annexation of Crimea in 2014 where people who spoke her mother tongue were killed by other people who can also speak her mother tongue, this changed. That was the last straw … she felt she had to do something about the horrible images. Violence and the suffering of others came too close to stay away from it.

As the last in a series of work related to this, she made six large books with drawings.

These six large “books” have been drawn with acrylic paint directly on six “glossy” magazines. During the making of these visual ‘diaries’ everything on the page took on a different meaning to her. The advertising slogans and the images of the consumer goods became mixed with images of war, refugees and executions. These contrasts and sometimes translucent texts make the drawings even more powerful, with a raw spontaneity.

It was a painful work period for Trebukova; never before has she felt so directly involved in her work with the subject of pain and injustice.

In “Anywhere Anytime” a selection from the six books is included with a poem written especially for this book by Antoine de Kom with a reference to the recent history of Suriname. 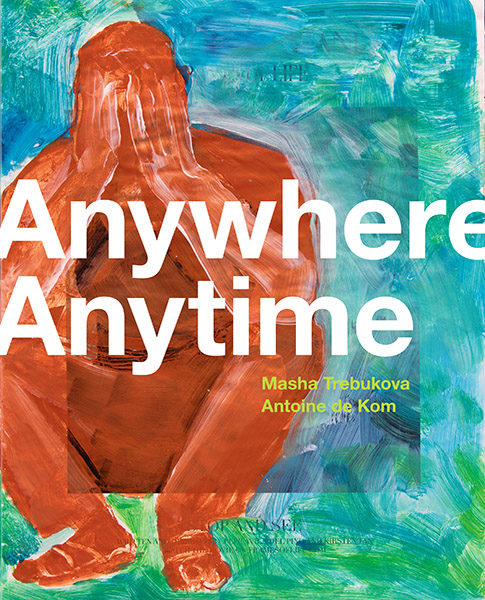 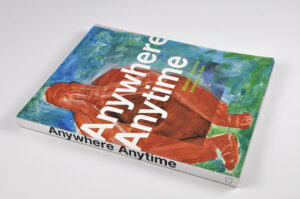 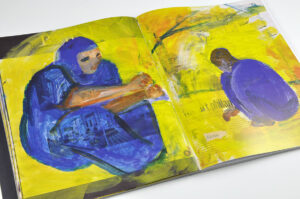 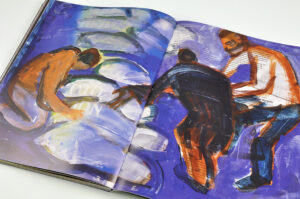