A historical document on a current subject: artist Bart Domburg made a written art piece with the tweets of Donald Trump.

Trump managed his presidential power through Twitter in his very own demagogic way. Twitter gave Trump the opportunity to interact directly with his followers, which he gratefully took advantage of. Through dozens of tweets a day, he spread directives, opinions, insults, intimidations and judgments that his eighty million followers eagerly read. By doing this he created a parallel reality and a villain image. Opposition from traditional media he has consistently described as ‘Fake News’. Trump’s reality is believed unconditionally and with conviction by his followers and threatens to split society. The consequence of this was painfully manifested during the storming of the Capitol on January 6.

In 2013, artist Bart Domburg started writing historical texts, data and archive material with a fineliner on large sheets of paper. In 2020 he realized that Trump was literally writing history through social media; this had never been done before. He decided to write down all tweets from October 1, 2020. In Domburg’s handwritten version, the tweets are no longer directives on a website, but the very personal messages of a man who is manipulating the world whilst writing.

With a preface by Hans den Hartog Jager. 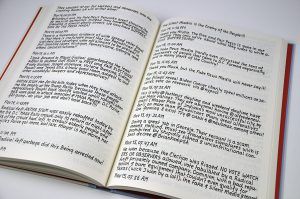 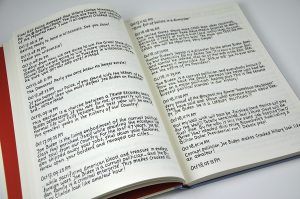